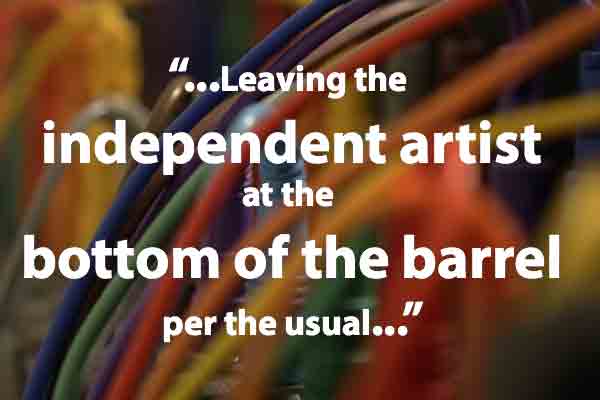 A History of Music Pirating and Music Samples

We watched what Napster did for Music Pirating, and we were inspired. As a bedroom producer, we just can’t afford the awesome quality analog gear and expensive gadgets to record the audio. Rather, we are stuck surfing the deepest darkest areas of the web or rolling the dice on loop packs.

All these amazing evolutions to the music industry, yet not many of them are that great. The limited options for the up and coming music producer are now monthly subscriptions.

Because for all these companies, when “big profits” dipped, every revolutionary platform was told to devolve.

Free beats were like mining for gold in an old video game. It took ages to find anything!

Napster was a farm ground for audio, even before cable internet.

Now, it seems every popular music platform or company expands to the point of being utterly pointless at some time in your life. These companies had no choice, the music industry pointed down and said, ‘Waaah. We can afford more lawyers than you; we will now make the rules.’

Music Pirating is gone, the subscription is here.

Myspace, Grooveshark, Soundcloud, Beatport, Itunes, Spotify, Pandora, etc. all pushed the boundaries of technology and offered platforms to share your work. These websites defined the evolution of the musicians life. Massive fan bases swarm to these websites, they earn millions a year, and even built a new culture of interesting.

Ego, the ego stemming from the popularity on a website. Websites that earn more than the artist.

Even worse are those who believe plays, favorites, or comments on their music improve their music careers. Facebook forms have turned into a complete disaster of kids asking for feedback and blocking anyone who says anything negative.

Myspace, Grooveshark, Soundcloud — live in their echelon class of music expansion because when they started, it was a level playing field, and they were free.

Giving independent artists a platform to shine! A place to share, and search new artists. A place to grow your fan base, without selling out to a label to distribute your content. Music Platforms essentially allowed for “viral” growth and organic fans.

As the websites grew, so did the need to expand their offerings and revenue streams because they never built their platform to scale correctly. Regardless of the egos surrounding their tech ability with a website that hardly works on mobile, they have to charge their customers.

Now, this also leads to outsourcing technology, increasing prices, and lowering the quality and quantity of each purchase.

Leaving the independent artist at the bottom of the barrel, per the usual.

Soundcloud was clearly the winner with their offering to let anyone share any track!

For example, Soundcloud is one of those fast devolves. Now your likes and albums have concatenated samples of your favorite tracks, utterly destroying all of the time it took to create these playlists.

Consider the amount of time per user was just reverse engineered? Crazy right?

Soundcloud used to be the host for all of the best bootlegs and remixes online, but as the companies started to put their squeeze on Soundcloud’s policies,

they squeezed out independent artists around the globe.

Here’s an example of Soundcloud’s idea of a solution. Cutting all the tracks you spent years organizing, finding, etc… Into a preview.

So let’s talk about something outside of Soundcloud, like music marketplaces.

How to find Loops and Samples without Wasting Money.

What is happening to the loop and sample game?

If pyramid schemes are illegal, why is it possible for these companies to earn more per download than the artists associated with it? Because the artist is a part of the platform, these platforms were not adequately built or optimized for mind blowing usage; multiple devices don’t work – like Soundcloud, does not operate on an Ipad device.

From an artist perspective, removing mobile ability by forcing an application, and simply not having a functioning website across all medians, to get more ‘mobile usage data to sell to vendors’? I’m only guessing.

Pretend with us and think of time you needed to send a Soundcloud sample to someone else. A gig, a band member, a future job…

The Screenshot above is a google speed test, the first step to any product release, as mobile usage, is 80%+ of your traffic.

The next phase for an independent artist is to build their platform, get optimized to rank on google and stop depending on these websites for growing your career or fan base.

Considering none of them allow any exploration of the metadata coming from your customers/fans, even on request for a deeper analysis, Soundcloud replied with “not offered.” What’s the point in using an application that doesn’t let me see what I create?

Can Artists Advertise on Soundcloud?

Kind of like how advertising on Soundcloud has not provided any real marketing to independent artists until recently and has been only affiliate programs generated by music labels years ago.

Does Soundcloud loops and samples or free beats have any quality?

Not exactly. The best beat makers and sound engineers are selling their audio on big company websites.

Soundcloud is great, and I highly recommend it. But if you have more than 500+ followers, you’re missing a massive amount of revenue potential, not to mention 60% of the music listening base will NEVER download the SoundCloud application, most of them are still worried about the Facebook chat application.

If people are not going to download an application and it doesn’t work on a few devices – it’s no wonder Soundcloud has steadily died out for most independent artists around the world. So to us – that’s a significant impact to your fan base, especially when they are trying to charge the average users now.

What’s next for Music Producers?

Long story short – It’s always good to build out your social media presence, but if that’s all you’re working on in 2017, then you’re missing a lot of money on the plate!